Since the tabling of the City’s draft budget for 2018/19 in March, further examination of the budget proposals by City officials and councillors has led to a reassessment of the budget proposals for the Water and Sanitation Department. The overall increase in the Department’s budget requirement has been reduced from 26.96% to 19.9%. This has been achieved primarily by rephasing the New Water Programme, including the savings which will result in the current financial year.

After careful and intense consideration of a record 40 000 comments which were received on the proposals in the City of Cape Town’s tabled (draft) budget, as well as various portfolio committee meetings, workshops and discussions, the reduced revenue requirement has resulted in substantial changes to the proposed water and sanitation tariff increases to be proposed for Council’s approval of the final Budget on 30 May 2018.

Among others, certain proposed domestic, non-indigent water tariff increases have been reduced:

Among others, certain proposed domestic non-indigent sanitation tariff increases have been reduced:

The property rates increase is also proposed to be lowered from 7,2% to 6,5%.

We have looked through all items in our budget with a fine-tooth comb; we have seen where we can move funds, where we can continue cuts and how we can adjust our loan book and capital replacement reserves. For instance, we have reviewed our loan amounts which will reduce the external interest costs in the tabled budget by just over R300 million per annum over the next three years.

Significantly, we have also amended the capital requirement for our New Water Programme, the one that is under way to supplement our water resources as a water-scarce city. The amended New Water Programme is now proposed to comprise R14,1 billion over the next five years instead of the originally proposed R19 billion.

No changes have been made to the proposed fixed delivery charge for water. This remains necessary to counter the variations in water usage and to bring certainty to the water and sanitation tariff. Whether one uses more or less water, for instance, it still costs the same to operate the distribution system and the City needs to cover its costs. No profit is made on water income. All income is used for reliable water services provision, such as the investment and maintenance of infrastructure.

We thank all of our residents, businesses and other organisations who have taken the time to comment on our proposals. The past two years have been the toughest that we have faced as a city and our emphasis on team work and collaboration will continue to get us through the most trying of times.

We will continue to listen to Cape Town as this is key to the partnership that we have established and hope to build on it over the coming months and into the future. 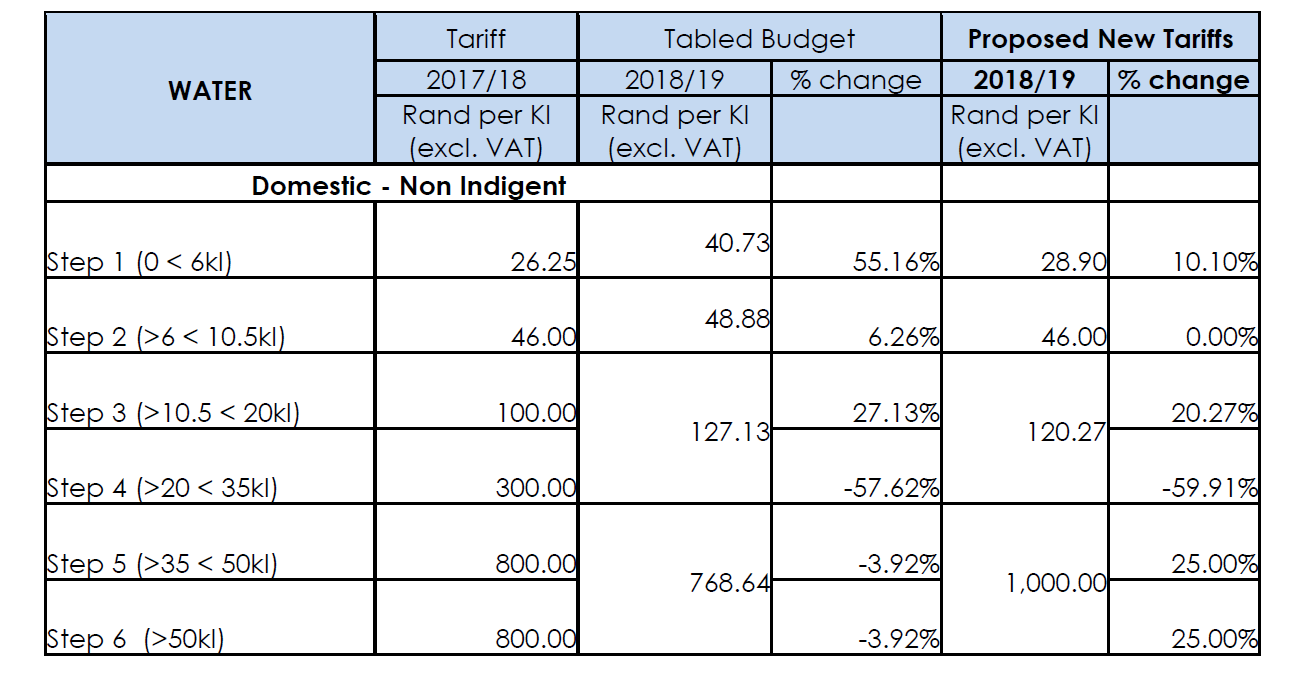