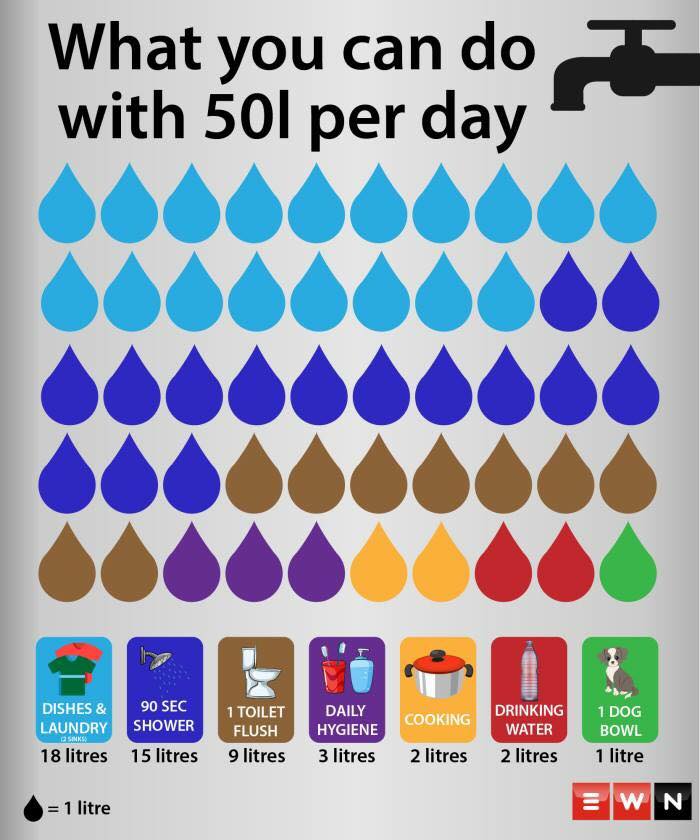 We have reached a point of no return. Despite our urging for months, 60% of Capetonians are callously using more than 87 litres per day. It is quite unbelievable that a majority of people do not seem to care and are sending all of us headlong towards Day Zero. At this point we must assume that they will not change their behaviour and that the chance of reaching Day Zero on 21 April 2018 is now very likely.

The people who are still wasting water seem to believe that Day Zero just can’t happen or that the City’s seven augmentation projects – set to produce around 200 million litres per day – will be enough to save us. This is not the case and, while our water augmentation programme will make Cape Town more water resilient in the future, it was never going to be enough to stop Day Zero.

The crisis has reached a new severity, necessitating a series of new emergency measures:

We can no longer ask people to stop wasting water. We must force them. We have listened to the comments of thousands of residents asking for fairness. Council will on Friday be voting on a punitive tariff that will charge residents exponentially higher rates for water usage above 6 000 litres per month.

The table below outlines the difference between the current and the proposed punitive tariffs:

I will personally fight to ensure that the proposed punitive tariff exempts those who are using less than 6 000 litres per month.

Provision will be made for households larger than four people to ensure that they are not unfairly penalised. We ask residents to contact the City beforehand on water@capetown.gov.za or enquire at their nearest walk-in centre.

The proposed Drought Charge is likely to be dropped after a massive outcry from Capetonians that it was unfair. I understand that response and it has personally been a tough lesson for the City. I just want you to know that the City proposed the charge because we wanted to keep delivering important and essential services during this crisis. I wanted to continue making Cape Town a city that delivers opportunities for all. We are now going to have to make deep cuts to important projects.

We will be moving to level 6B restrictions with a new limit of 50 litres per person per day to make up for the many months of missing the 500 million litre per day collective consumption target. The new restrictions will come into effect on 1 February 2018.

The new daily collective consumption target is now 450 million litres per day. This will be in place for 150 days after which the City will reassess the situation. Level 6B restrictions will also limit irrigation using boreholes and wellpoints.

The City has also advanced its planning for Day Zero with approximately 200 sites having been assessed. The City will be announcing everyone’s local collection points from next week so that communities can begin preparing for that eventuality.

We will also be making detailed Day Zero contingency plans available soon to answer all questions that residents and businesses might have.

In terms of the City’s work, we have been working hard to reduce demand through advanced pressure management, massively ramping up the installation of water management devices at high consumption households.  Our teams are also significantly intensifying the leak detection and repair programme, and we are rolling out education and awareness campaigns and extending our use of the treated effluent system which offsets the use of the drinking water for non-potable purposes.

Teams are working around the clock to deliver the emergency plan for desalination, groundwater and water reuse. But, as I have already said, this alone will simply not be enough to avoid Day Zero without savings from all residents.

Cape Town, this is the moment where we can bring about the fundamental behaviour change that is needed to save us all from running out of water.

The time to act for everyone’s sake is now. So if we reduce the demand enough now, we can still get our water delivered to our houses and not have to queue daily for our allocation.

Sign up for free and without obligation.
Get our newsletters and stay up to date with events and news in Noordhoek!


Who is the NRPA?